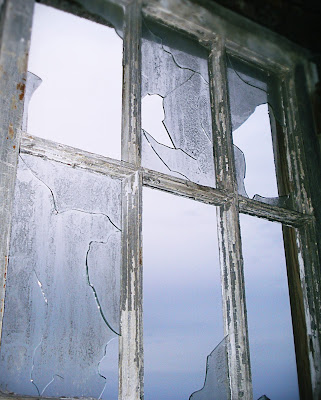 The History of Addovolt Productions from 1995 through 2004

Addovolt Productions used to be called Catacomb Productions but everyone said that that sounded too gloomy which my projects are often the opposite of. When I was planning on resurrecting the name in 2006 (after I thought that I was going to retire from film after one misfortunate year, 2005), I found out that some kid in England had his own Catacomb Productions, so that was the end of that for Catacomb (for me, not for him).

I decided that I wanted to go with a production company that also sounded like it could be a battery company. That's why it's now and forever Addovolt.

Any way, some of these older projects are great, some of them are not-so-great. I don't really want to post them all for viewing. I'm proud of them for what they are and they were my first projects but I want to move on too. That's why all my favorite moments from these films were mashed together into a short film called "Remnants" (2009).

"Slumber Party Massacre on Kolb Avenue" (1995) live-action short comedy film--horror film parody with explosions, geeks, cool kids, and amatuer S&M. Filmed on cheapo VHS. Slumber party friends resurrect the phantom of a serial killer from years ago (via a seance, of course). So the ghost/zombie/whatever kills some of the kids but the nerd saves the day. Fun to film, came out fine. No, there is no "Slumber Party Massacre on Kolb Avenue 2". Actually funny with decent comedic timing.

"Sweet Surrender" (1996) live-action music video. Another VHS masterpiece (not really). Yes, this is my music video interpretation of the Sarah McLachlan song. It was the 90's and this was a student project, so give me a break. Since everything I do (even back then) is a narrative in some way or another, my story to the song is about a young girl flirting with suicide who gets sent on a journey with (and eventually succumbs to) Death. I thought that the project turned out kind of dark and gritty but most of those who viewed it felt as miserable as the girl in the video. My first flop.

"The Revenge of Rumplestiltskin" (1998) stop-motion animation short fantasy film--also shot on VHS. The grouchy gnome destroys a royal household after the queen stiffs him on her pledge to donate her first born child. Overly-influenced by Tim Burton's "The Nightmare Before Christmas". Title character modeled on Marilyn Manson and Tucan Sam. Boring to make, fun to watch. As gothed-out as a cauldron full of bats. Won Best Experimental Short Film 1998 award from D.A.F.T. (used to be Detroit Area Film and Television but is now Digital Arts Film and Television) which I thought was pretty neat.

"Antonio the Triumphant" (1998) live-action feature length comedy. More like a run-on sentence than an actual feature length indie film project. 1 hour and 20 minutes of dumb. Again, VHS. A boy sells his soul in order to become a Mediterranean dictator and media whore. As awkward as it sounds. Gang riots, transexual android spies, musical funerals, and polygamy. A big hit throughout the Metro Detroit living room circuit from 1998-1999. The project featured over 60 actors which, to us, was a cast of thousands, so at least half of the neighborhood was involved somehow. The one and only copy vanished long ago.  No one knows where it is.

"Rumplestiltskin Rides Again!" (2000) stop-motion animation short fantasy film; a 40-minute DV sequel to "The Revenge of Rumplestiltskin". An epic! Rumplstiltskin is still gloating over his last massacre and gets wrapped up in a plot to assassinate Cinderella and Prince Charming. Rapunzel helps him. Too much talking at first and then the set gets lit on fire during an atomic explosion, so that added a bit of spice. When people at school would watch it without me while they got stoned, I knew that I was onto something. I tried to use this film to get a scholarship to Columbia College but, for whatever mysterious reason, that never materialized. I guess another disappointing sequel in that long, long line of disappointing sequels..... 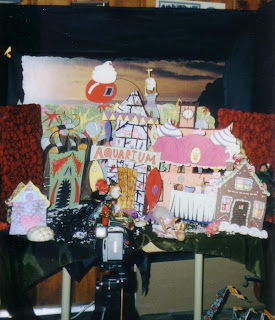 One of the sets of "Rumplestiltskin Rides Again!"

"A Saturday Afternoon" (2001) live-action short comedy film--16 mm black and white. A human sacrifice in a park is aided by a young couple; a dark joke inspired by Charles Addams cartoons. People are never what they seem, I guess. Came out well. The actors did a terrific job.  The female lead is Mary Beth Brennan, future lead singer of The Baby Magic and Baggy Time.  Many years later, we went on to do multiple music video projects together. 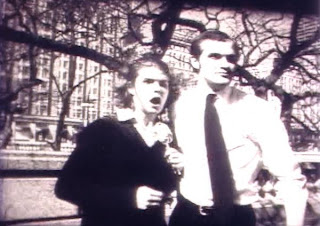 The young, devious couple in "A Saturday Afternoon".

"Miregale" (2001) experimental short fantasy film--16 mm black and white. The inner workings of a corrupt sorceress are explored as she watches another woman steal her heart's desire. A gothic fever dream of angelic demons, sexual tension, aging, black magic, gray magic, and emotional isolation. Very cool. One of the projects that I'm most proud of from that period. 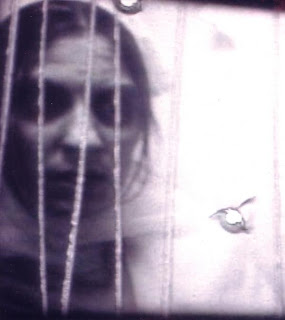 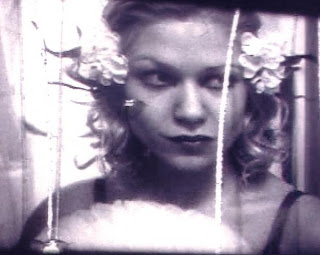 The title character, an elderly witch, watches her true love get taken away by a beautiful, young enchantress in "Miregale".

"Scrumptious" (2002) experimental short comedy film--16 mm color. A vicious retelling of the "Hansel and Gretal" story. I was not a happy person when I did this project. Inspired by 120 Days of Sodom, "The Brady Bunch", and "Caligula", this was the one that everyone enjoyed watching  (naturally). I wanted to make something awful, impolite, mean-spirited, and visually beautiful/hideous.  I was able to accomplish that goal with the assistance of 27 extras having a pansexual CandyLand orgy. The main characters get beaten to death with a baseball bat after they get fucked. Yes, it's one of "those". Culty, off-center, and genuinely creepy, this film won me an audience award and a complimentary roll of 16 mm film on which I shot extra footage for "Eternity Beach"(2002). Lots of people are in this film from my past and I have mixed feelings about this project because I felt like I had exploited my friends. Not a pleasant film but it was a true expression from that time. 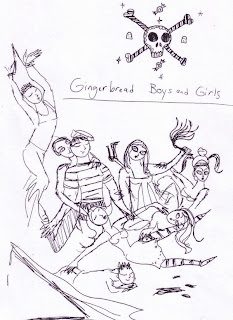 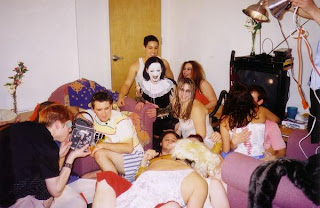 The concept art came close to the finished piece for "Scrumptious".

"A Portrait: Untitled" (2002) mocumentary short film--16 mm color. A pretentious film student wrecks havoc throughout his dorm and school. Guess who this is based on? Self-parody but also a few cheap shots aimed at my fellow art schoolers. Poorly-edited but a few funny moments. 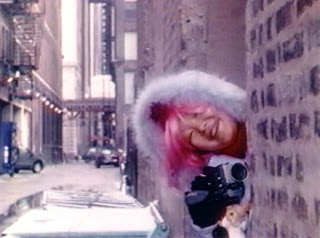 Tyoki, the videographer character in the film, lends some style to "A Portrait: Untitled".

"Eternity Beach" (2002) live-action short film--16 mm color. An Eastern European soap opera star gets taken into a very bizarre parallel world. Drag queens, fish humanoids, and some very beautiful actors and actresses acting weird. Kind of 60's. We made up a "unique" language called Wachzychian which is a mixture of Polish, Spanish, French, and gibberish. Subtitled in English. Beaches, limos, seedy hotels, and fur coats from the thrift store. Won an audience award. Out of all of the old projects, this one is the best. The one film that the old gang still enjoys talking about and, yes, that does mean something to me. 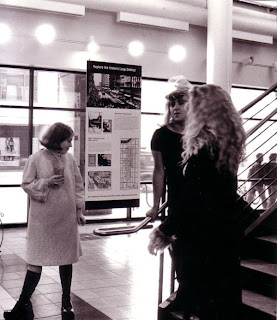 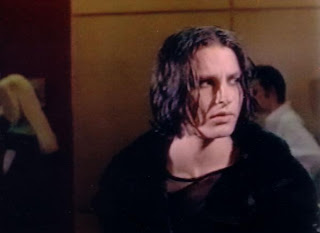 A Wachzychian soap opera star gets zipped away to another dimension in "Eternity Beach".

"A Really Hardcore Documentary About American Society" (2002) short documentary--DV. The title says it all about my "hard-hitting" insight regarding the downfall of the American...... American what? It's never defined in my thoughtless attempt at being Micheal Moore. I think that I was just disappointed that no monsters or hooker nuns popped up in this project.

"Favorite" (2003) live-action short fantasy film--DV. A callous young man purchases a robot ballerina which he simply replaces once she runs out of electricity. Now I'm back in the right territory! A strangely poignant commentary on replaceable lovers. A project that came out much better than expected. 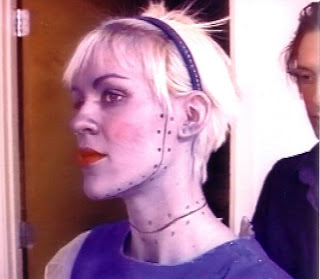 A human boy buys a mechanical girl in "Favorite".

"The Unmaking of: 'The White Chamber'" (2003) documentary short film--DV. A narrated journey through the cancellation of an elaborate, short fantasy film that was supposed to be made earlier that year. That's what happens when your run out of time and money and your production book disappears somewhere on a train from Chicago to Detroit. It was all my fault, definitely. The documentary isn't bad once the interviewees (the scheduled-then-cancelled crew and actors) get to throw in their two cents. 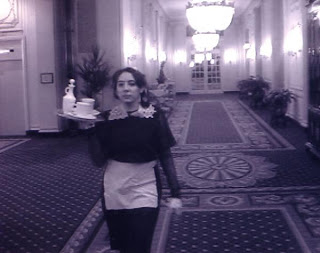 The "White Chamber" film originally revolved around a maid character and a collection of cursed relics but we never ended up making it. So, for the "Unmaking" documentary we did a test shoot just for the hell of it.

"Here and Gone" (2003) stop-motion animation fantasy short film--DV and 16 mm color film. A little boy escapes a war-torn city through a magic museum. Depressed over the cancelled project and personal affairs, I got jacked up on Diet Mountain Dew and leftover Christmas candy, and completed this project in Detroit, in the basement, in the middle of January. The finished film has a lot of technical flaws but still came out beautifully. "Here and Gone" was seen by less than 10 people but it's a cool little film that was a launchpad for other films.  A good learning experience. 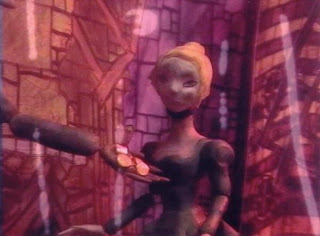 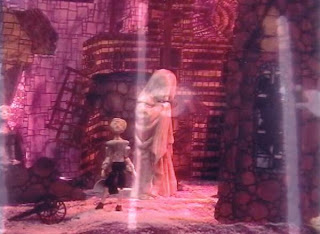 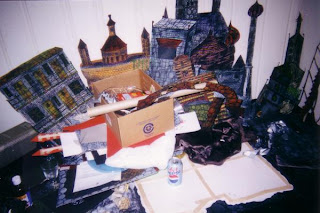 2004 was spent on projects that eventually got scrapped. For the next few years, I only worked on other people's films (art department, usually) and did illustration work.

A video collage, called "Remnants", featuring clips of projects made before 2004 can be viewed at the Addovolt Youtube channel: