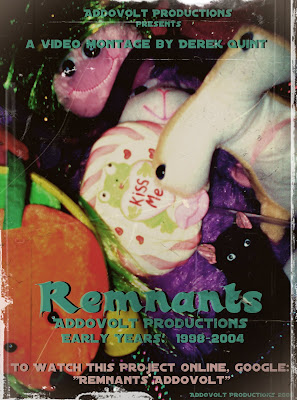 The project can be watched HERE. Feel free to Rate and Comment. More in-depth information about the projects from which these scenes came is HERE.

"Remnants" is a 4-minute video collage of scenes and images from our past projects, spanning from 1998 to 2004.  It premiered online September 30th, 2009.  Rather than uploading all the old material (some of these past projects are really good; some of them are really not-so-good), I've decided to compile some of my favorite moments into a 4-minute video. Witches, goblins, killers, pagan Barracuda Gods from alternate dimensions, robot ballerinas, Eastern European soap opera stars, drug addicts, cult members, enchanted transexuals, and geeks--all in fast forward.

Thanks to D. Doiel for permission for using his song "Silver on Pink" in this video. Clips are taken from the following short films:

Thanks to all those who participated in these projects throughout the years!
Posted by AddovoltProductions at 1:02 PM