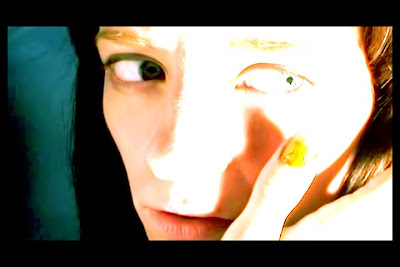 The main page for this project is HERE which has a link to the film, photos, the new image used for posters and postcards, the new reviews, and the initial director's notes.

I just watched the film again a few days ago and I actually like it better now than when I first released it online. It's an ugly, flawed, little art film but it's also pretty cool and definitely strange. The concept and the emotions behind it emerged out of a certain wavelength and, if I was going to do that film, I had to do it at that particular point and just go through with it.

Could I make "Second Star" now?

No, actually I don't think so. It came out of a certain time and place. It's a mood piece that belongs to a specific point in the past. It's fine for what it is and when it was made. It's fine as itself. The way it is is the way that it's meant to be.

"Second Star" SHOULD be flawed, queasy, and tilted. That's the film, that's the story.

I know that some people REALLY like this film (thank you!), some aren't into it at all, and/or they're confused by it (me too, by the way....) but I kind of love it for what it is. Clearly, now is the perfect time of year to revisit "Second Star"--to push it out there again, to give it full attention for one more month of repromotion, before we move on to some other things.

"Come, come thou bleak December wind,
And blow the dry leaves from the tree!
Flash, like a Love-thought, thro' me, Death
And take a Life that wearies me."