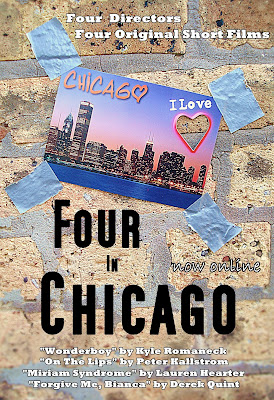 Click on the titles to watch and read about each film within the "Four In Chicago" project:

* "On The Lips" written and directed by Peter Kallstrom
Véronique is a French photographer who has recently immigrated to Chicago with her lover, Olivier. Caught between adapting to life in a new city and her overactive imagination, their true intimacy is revealed when the events of an afternoon cause the lines between reality and fantasy to become irrevocably blurred.

* "Forgive Me, Bianca" written and directed by Derek Quint
An old, dead relationship goes from wrong to worse when a fashion designer rediscovers a very sinister gift certificate.

* "Wonderboy" written and directed by Kyle Romaneck
A young man masquerades as a famous artist in order to impress an aspiring journalist.
Posted by AddovoltProductions at 9:07 PM