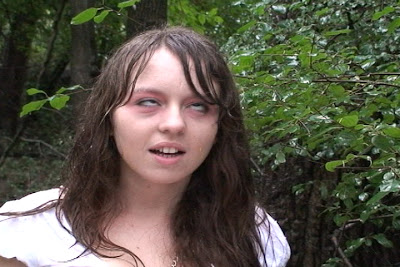 Through the (cracked) looking glass.....

Because it's the end of summer, and because it's just for fun, I thought that we should have one more step into Wonderland.  Let's put the proverbial cap on this conversation.

The "Buckles and Breadbowls" documentary will be online in September.  I'm busy as hell right now, we were going to do a re-feature on "Go Ask Alice...." anyway, so here it is. I was going to do it next month but I'm having these two project features switch places instead.

It all boils down to timing.

The whole rundown with the story about this project, the whole Making Of trainwreck associated with it (a dying camera, crazy weather, wiped-out audio, and so on) is detailed on the official page for this project HERE.

I just watched it recently (the first time in a long time) and has sort of an early Internet 2.0 junkiness that makes sense for when it was made.  Very meme, "Funny Or Die", photobomb-y, WTF-y, LOLCats, that type of shit.

I kind of like it because it's so weird and off-center.

It's obvious that she's supposed to be a drug addict from the get-go, so at least that's established early on and helps explain the tone of the overall video.

The messiness of it (it was conceived to be that way) is too too much.  The fact that the story (and the project) is supposed to be "fucked up" could have been approached with a bit more digestible subtlety.....but  (clearly) it's too late now.

The actors (especially Britney Collins) are great.  Britney is always kind of perfect and has an understanding of complex comedic tonalities that could throw other people off.  She's dependable and I love working with her (I look forward to working with her again on upcoming projects).  Michael Marius Massett as the White Rabbit is brilliant too--like Britney, he's dependably wonderful in everything he does.

The editing of "Alice" is obnoxious and the camera work ranges from surprisingly attractive to straight-up crapola.  No consistency in those areas.....

It's an old, deeply imperfect project, it's fun, and people like it when they're high.  Maybe that's the only time they can understand what's going on with it.

"Alice" will always hold a special place in my heart.....but a place in my heart that doesn't necessarily have the best table and lighting.  The cheap seats.  That's fine for "Alice".
Posted by AddovoltProductions at 5:31 PM