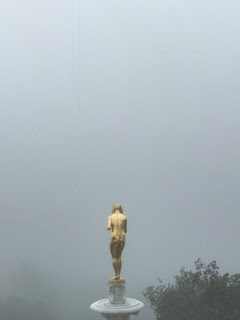 Thank you to M.F.L. for sending me this picture that he took at Hearst Castle.  I'm gonna use it because it's perfect!  It's golden, gloomy, and it has a nice pair of booty cheeks.  Anyway, thanks Matt.

When we do the feature length horror film at the end of 2017/early 2018, yes, I'll do a website for that.  Because that's a product and will be its own thing.

In the meantime, though, it's more music videos and short films.  I feel like this blog is fine for the moment as our online headquarters.  Blogs are old hat at this point in Internetia Land but, oh well.  It's fine for now.  I'm not going to jump on the bandwagon every time some new and cute platform poops itself out for everyone to enjoy for a while (for example, we didn't get onboard the Vine ship when that was happening and, now that that ship has sailed, we're totally okay with letting that go; bon voyage).  We'll take things project by project and do what makes sense (for this specific production company which has a different personality type than other groups of our ilk) as things develop.

I'm thinking about doing Instagram (I understand why people are into it, I get it) which would probably be a good idea once that horror film product is going to be pushed next year.  Yeah, I probably should do that.  We'll get to it later (....?.....[side-eye]).

I have a secret to tell you:

I don't love social media.  I love media (obviously), and I love socializing with people face-to-face, but I'm not a social media guy.  But I have to do it to some degree because I work in media and because it's 2017.  So I have to at least a little bit.  Whether I like it or not.  But I also don't want to be cornball or phony when it comes to social media (I feel like we're all dealing with that enough as it is, right folks?) so I have to reconcile those platforms in ways that don't completely contradict how I go about things or what our films are about (which is empowering the individual rather than drowning in the collective).

I don't know what kind of website we'll cook up for the horror film, or what it will be like, but I just want some kind of simple, straightforward, unannoying website.  Nothing too trendy.
Posted by AddovoltProductions at 4:16 PM