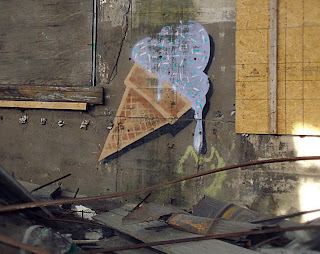 Whoever did this, I love it.  And whoever added that wonky little Pac-Man eating the ice cream, I love that too.  ♡  This is a photo from a place where we were recently shooting at in Gary, IN.  Gary, IN is wonderful.

Sometimes people get weirded-out by what I do:

"Why make a film that has less than a million dollar budget?"

"Will it be at the movie theater?  If not, what's the point?"

"If you're not going to make a substantial amount of money from this project........why do it?"


The best thing that I can come up with makes a comparison that tends to be overused.  I read a quote somewhere about how everyone who works in some kind of creative field is constantly comparing their format to music.  We're all saying that we're like musicians even when we're not making music!

But that's fine.  It's a workable comparison because the askers understand when you use music-making as a metaphor for whatever it is that you do.  It's helpful and people get the gist of it.

There are the mainstream, big-time, fancy singers/bands/musicians who get played on Top 40 radio, have their songs blasting out of Chevy commercials during the Super Bowl, and sell out United Center.  I like a lot of those bands.  I have no problem with them.  Some of them are super-talented and they'll be around and loved for decades whereas different ones align perfectly with the zeitgeist at the moment, they'll make a fortune, and they'll be gone in a few years into wealthy retirement and "Do You Remember When?" trivia.  And that's okay too.  Some of the major players will stick around and some of them are only temporary for right now.  I have, and do, buy music from both types of super-acts.

In the music world--more so than in the film world--there are respected spaces for indie bands, underground punk bands, smaller acts, genre experts, and foreign artists who resonate with certain kinds of bases but they're not going to sell out United Center or, maybe, even The Metro.  They're for small clubs and hipster bar venues and that's fine.  They aren't featured in Entertainment Weekly.  You won't find articles about them in Rolling Stone or NME (but you will find them on small, stranger blogs and sites and, yes, they'll be playing at a venue near you within the next few months or so).  But they don't get major funding and you won't see their ads in Target.  And that's okay.

In America, some of the goth bands that I love (that I buy music from and go to see their shows), for example, would never, ever in a million years get big $ chunks for a large, fancy tour with elaborate, mechanized sets, corporate advertising, some dancers, and some pyrotechnics too (which many of them wouldn't want anyway, but I digress.....).  No.  It's not going to happen.  The profit margin isn't there and the audience isn't big enough.  No one would want to invest in that because they're not stupid or financially suicidal.  Rather than stomp my feet or pout about that, I respect their realism.  The fallout would be tremendous.

Those smaller acts, however, will be playing their shows, recording albums, doing music videos, hustling to get their work mentioned, and getting write-up's here and there.  Some of them will go into debt creating their work and touring, some of them will break even ($), some of them will get little chunks of funding from random sources, and some of them may even make a decent amount of money doing what they do.  Not mansion money, mind you, but pay-the-rent, fund-the-next-album money with some leftovers to set aside in the bank.  Which isn't tragic.

Not all bands need to be selling out United Center.  Some of them make bizarre, challenging, experimental music that isn't for everyone.  I love pop music!.......but I'm also really, really glad that there are other bands around too--smaller bands--that offer other kinds of song flavors, themes, narratives, structures, and textures that aren't, and never will be, featured on iHeartRadio because their audience wouldn't strongly respond to certain kinds of music, they won't profit off of that kind of stuff, and that's understandable.

Sometimes--every once in a while--small acts turn major because conditions arise, moments slide against each other just so, and things simply happen for various reasons.  Sometimes those acts that go from small-to-big stay on the larger end of the spectrum and sometimes they're only big for a moment and then get smallish again and that's that.  Which is fine too.  Some egos accept that arc, while other ones implode.  It depends.

We have to have our major act bands!  Yes, absolutely.  And we also need some indie rappers, punk bands, metal bands, and quirky synth musicians too.  Do you catch my drift?

At heart, in my personal life, I'm a realist--not a fantasist--no matter what you may assume from the themes of my work.  I'm actually kind of a hardcore realist, come to mention it.

I'm an independent filmmaker, not a musician.

I love going to the movie theaters in Chicago and I love watching movies at home too.  I'll go pay money to see the superhero films, the remakes, the bombs, the phenomenons, and the classics. Anything.  I'll pay to watch odd, small films online and then I'll go to the art house theaters to see films that I'll cherish forever as well as films that I'll end up hating too (that's the risk that you take!  Oh well.).

I'm the anti-snob because I'm culturally greedy and I want everything.  All of it.  I love and appreciate all kinds of things and people.  I'm extremely easy to entertain, I'm open-minded to a dangerous degree, and I don't get bored.

My favorite favorite kinds of films are cult films.  "Rocky Horror",  Derek Jarman, Kenneth Anger, Mya Deren, Gaspar Noe, and "Wicker Man".  As a creator, that's the tradition that I follow, the road that I ride through, the path that I'm on that exists because of my artistic forefathers and mothers.  I'm lucky because my sensibilities--as a filmmaker--are generally affordable.  If I needed robot-dinosaur CGI, burning buildings, and exploding tanks to fulfill my story visions, I'd have some really big problems.  I'd be up Shit Creek since I don't have access to $50 million+ budgeting structures.  Fortunately, I like people, locations, costumes, and unorthodox scenarios.  I'll be okay (thank goodness!).

If I were a musician, I'd be making weird synth music that sometimes features really catchy hooks and other songs would be so out-there that people--even those from my small fan base--would be like "Ugh, why did he include that song on the album?".  I'd be an acquired taste working with a limited budget.  Just like I am now.

People can handle and appreciate indie bands and unusual music acts from unusual sources.  They can also handle and appreciate unusual films from unusual sources too.  There are spaces for everyone and all should be given room to work their crafts no matter what the results look like, sound like, and whatever the profit margins will (or won't) be.  The clarity that exists when it comes to understanding independent musicians and their motivations isn't quite there when it comes to understanding independent filmmakers and their motivations.  Hopefully I'm articulating my point well enough.

We have to have the Mains and we have to have the others too.  That's the healthy way.  Tons of others without Mains would create a collapse.  Only Mains, without others, would create stagnant genres.  Having both is the only way to go.  The rivers feed the lakes which connect to oceans which go into the earth, change their chemistries, and turn into streams which lead to rivers.  It's all part of the cycle and so are we.
Posted by AddovoltProductions at 8:20 PM