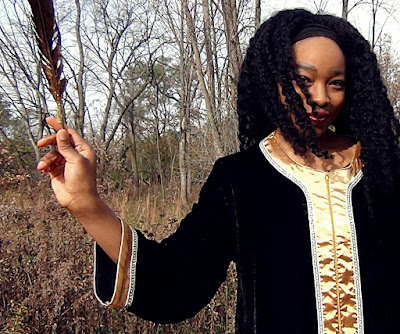 Tara Smith as a sorceress in the "October Sketches" short film

There's a collection of short films that I have done/am doing/will do called Vault Projections.  I've done a few of them over the last 7-8 years and they're conceived to number out at 17.  I'll be working on them and adding to this particular series of shorts, bit by bit, among other film projects, throughout my life.  Some people would see this as slightly morbid but I think it's fun.

As a connective tissue shared by all of them, each film's narrative is centered on timelessness and mythology (which can be overt or roundabout).  That can mean fairy tale fluff or slanted variations on reality, in some measurement, to some degree.

I was thinking about the short film that I collaborated on last year with author Ashley Sant--"October Sketches"--and how that project definitely fits within the Vault Projections framework, 100%, but I didn't realize it at first because the story in "October Sketches" is ultra simple, very minimalist.

Stories don't have to be convoluted in order to be impactful, memorable, or to make whatever their respective points are.  The themes (imagination, magic, etc.) of this short absolutely gel and contrast with the other films in this series.  Why didn't I realize this before?

"October Sketches" belongs in the Vault Projections--as film #4 out of 17--and that's where it's going to go.