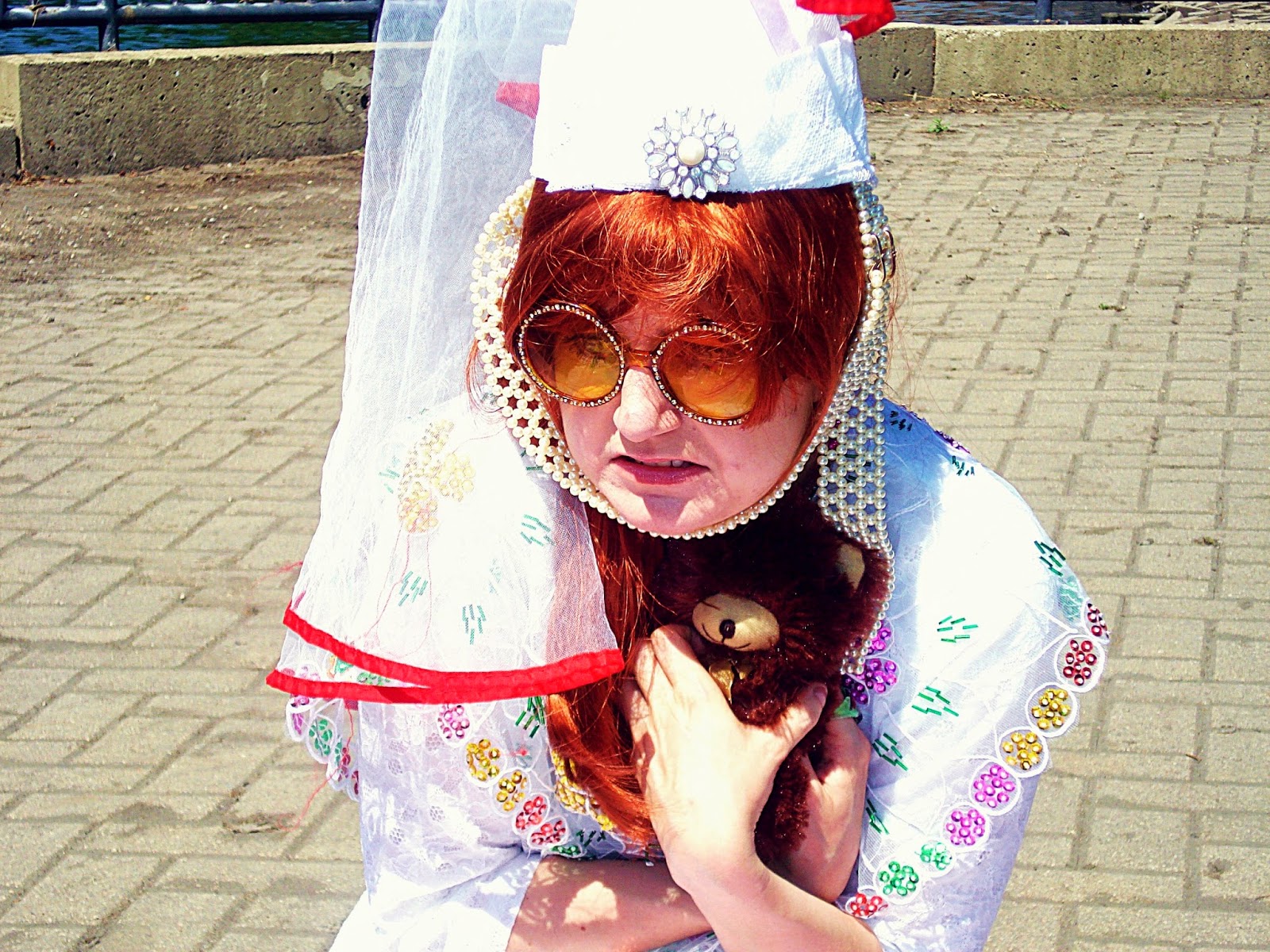 The "Nature's Ways" fairy tale short film is narrated by a British male voice.  As though you're listening to a Charles Dickens audio book or an old record.  Music (synthpop and classical) will accompany the film along with very particular, very specific, sound effects at certain moments (for example: the sound of a dinner gong in one scene, some clashing of swords in another scene, you get the idea).

The actors in the film are seen speaking to each other but, like the reading of a typical fairy tale, we hear the voice of the narrator speaking for them at key moments.  The action onscreen will be reminiscent of a silent film in certain respects.  We see the actors moving and talking throughout their drama but we don't actually hear them.

Again, the story is being told to us by a British narrator.  From a production standpoint, this makes things easier because we don't need to worry about recording sound and dialogue during the shooting process.  All sound recording/addition and music inclusion will be taking place afterward.  The fact that we're being told the story, having it spoon-fed to us in a certain respect, creates a sense of childish ease and timelessness while watching the drama unfold.  This is how I want "Nature's Ways" to be:  an extremely easy watch and something of a guilty pleasure.  It's designed for repeat viewings in the way that we can read/experience "Snow White", "The Three Little Pigs", "Goldilocks", etc. over and over again like favorite songs.  We know how the story goes, we know how it ends, but there's an addictive quality to it.  Simple, fun, delicious--let's do it again!

But this is still an edgy, creepy, PG-13 kind of film meant for adults and teenagers.  That becomes really clear within the first few minutes.  That vibe is established from the get-go.

The film will probably end up being around 12 or 15 minutes long.  Fast-paced.

Here is the story that we're told for "Nature's Ways".  Feel free to read it out loud while doing your best "Masterpiece Theatre" host impersonation (or the "Little Britain" host for that matter)......

[NOTE:  I'm stilling working on the end section of the story.  Give me a couple of days, please.]

Once Upon A Time, King Mercatroy ruled a kingdom.

Because the history of this kingdom is so complicated, I don't quite know if it was 7 centuries ago, 7 decades ago, or 7 days ago but it's in the books that King Mercatroy was one of the most prosperous and powerful monarchs to ever wear a crown.

Although he reigned over countless castles and innumerable stretches of land, what he valued most were the two virtuous ladies closest to his heart:

.....and their daughter, the majestic, the imperial, High Princess Tiberia.  Or, as she was known throughout the kingdom, "Little Tibby".

Little Tibby was coming of age.

While many of her peers were trying on wedding gowns, Tibby was kept occupied with other, less serious, endeavors.  She always did her best to follow her parents' orders but, yet, there were times when she wondered when she would be allowed to put paint on her face......or to mist herself with her mother's perfume.....or to adorn herself with the kinds of embellishments that would attract admiring glances.

The clocks ticked.  The lonely hours became weeks.  The weeks became months.  And the months turned into solitary years.

The King and Queen lovingly provided their sweet princess with every luxury imaginable and, of course, Tibby was given company by the royal household.  Yet, in her private hours, the princess longed for a different sort of companionship.

The past had not always been kind to King Mercatroy and Queen Moduli.  They thanked The Gods for the peace and wealth that their kingdom was now enjoying but they still wore the scars given to them by invading enemies--fierce and cruel villains from the foulest corners of the earth that the royal pair had defeated long ago.  Mercatroy still suffered from night terrors.  And Moduli used a dark paste to hide white hairs gifted to her from traumas long past.  She had done so since the age of 22.  The kingdom had not been easily won.

The King and Queen wished for Princess Tibby to retain her blushing innocence, to luxuriate in a sort of prolonged bubble of youth, the kind of which they themselves had not been able to enjoy.

Every month, the neighboring kingdoms sent names and portraits of available, worthy suitors for Little Tibby but King Mercatroy was exceedingly difficult to please.

The princes were always "too ugly" or "too handsome".  "Too fat" or "too thin".  Other ones were "too stupid" or "too weak".  The rest were simply "too ordinary".

If he were to give the hand of the princess to any of these men, who would protect her in this dangerous land?  Certainly not any of them.  No, no.  The princess was certainly better off at home, under her father's protection.  The King had no interest in marrying his daughter off to any of these buffoons.

Mercatroy was much happier thinking about his power and good fortune.  The wars had ended many years ago but the king demanded frequent reminders that he was, indeed, the mightiest of all rulers.  It was not uncommon for him to require displays of combative prowess to be performed by the very best knights the treasury could afford.  He no longer needed to swing swords with his own hands but it pleased him knowing that he had the very best trained assassins and the most ruthless mercenaries at his disposal.

The King's most fearsome enemies had already been annihilated but there were still a few isolated creeps lurking about from time to time, hoping to bring a bloody finish to Mercatroy's reign.  In the end, The King always managed to eliminate these pests in one fashion or another but their lingering threats gave him pause.  Nothing could be taken for granted.  Nothing was guaranteed to remain perpetually.  No castle was impenetrable, no king's flesh was made of steel.  King Mercatroy was a man of constant worry and he felt comfort in often sequestering his family in a chamber beneath his favorite palace where they would oversee the knights in practice, make decrees to the kingdom, and separate his familial treasures from the threats of the world above.

Princess Tibby was pleased to view her father's knights for other reasons.  She understood her father's need to reinforce his own sense of iron-clad security but the princess felt that the spectacle of the knights' practices held a different kind of value as well.  The efforts of these brave individuals were certainly not lost on her since Tibby was gaining a deep appreciation for displays of combat.

The "clang!" and "bang!" of the knights' sport echoed within the underground chamber while the forlorn girl admired the skills, brute force, and craftsmanship flashing in front of her eyes.

"Hail, Hail to the kingdom of my father!" thought Princess Tibby.  "Hail to these glorious protectors!  Such riches!  Such bounty!"

The princess wondered when she would acquire a knight of her very own.

"The sooner, the better," thought the royal servants.  "May His Royal Highness find a suitable consort for Our Young Lady.  And with haste, please."

But the king was in no rush.  Things were perfectly fine as they were in his opinion.  But for the princess, life was becoming unbearable.

Through one of the palace bakers, Little Tibby was connected to a merchant who supplied her with intoxicating substances, forbidden capsules, magic powders, and false identification cards.  No one noticed tiny bits of royal treasury vanishing because of Tibby's purchases.  "Don't worry, it's all just a bit of harmless fun for you, your Highness.  Live a little," the merchant told the princess.

In her desperation, Tibby began sneaking out of the palace in the dead of night, brilliantly disguised as a lowly and anonymous peasant girl.  She enjoyed pretending to be one of the common folk:  making jolly, participating in vulgar merriment, jigging like a wench, and sampling the nourishment of the serfs.  Although she hoped that some handsome cavalier would appear for her on a white steed, the princess--for whatever reason--would always return to the palace before sunrise, with limited experiences and no one to accompany her.  Even in her recklessness and foul moods, Little Tibby was careful that her nocturnal explorations remained in secret.  Or as secretive as possible.

Inevitably, more long, pure days came and went......followed by moon-lit amusements.  Back and forth, over and over.  But one thing remained the same:  The princess was alone.  Constantly alone.

After much drinking of ale and snorting of enchanted dust, Tibby realized that things would have to change.

How would she ever acquire a prince when her powerful father refused all marriage offers?

Perhaps she would have to find a knight to serve or maybe a squire to serve her?  How about a stable boy to hide beneath her bed?  Or another princess if thoughts steered her in that direction?  Or even a mad, old monk that no one had any use for?

After this moment of deepest despair, a glimmer of hope finally materialized.  A figure appeared in the lamplight:  a woman selling parchments and handmade scrolls.

"Would you like to buy some knowledge this evening, my lady?" inquired the Scroll Maker.

"No thank you.  We have enough scrolls in the palace library already," answered the princess.

"Perhaps you have room for more?" asked the woman with a twinkle in her eye.

It was then that Tibby realized that she had read every scroll in the palace library and that she could probably use some fresh reading material.