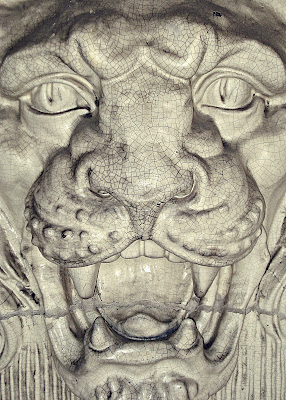 My films aren't dark for the sake of being dark.

I have my beliefs.

There's a sliver in modern culture that pushes us to deny or ignore the shadow part of nature--human and otherwise--so that we can supposedly coast along on some kind of light/blissful/sugary river of perception.

If you turn away from acknowledging/accepting death and wickedness (everyone/thing has these grains surging through their cells, some more/less than others.....), you're somehow supposedly safe.

If anything, I think that's the most dangerous way to look at things.

Only angels have halos.

You and I?  Not so much.  Don't kid yourself, don't believe the hype.

Everyone should have at least a little bit of playful familiarity with the evil side of things.

It helps us, strangely, to be the best that we can be, to be able to recognize the poisons within ourselves and others.  None of us are ever completely good.  Complete goodness is for the angels, not for you and I.

But we can improve ourselves and still be good and know how to be so without tiptoeing towards destruction in the process.  But I'm no martyr and certainly no saint.  I'll leave that role for others to try if they choose so.  It's not for me.

And probably not for you either.  Just a wild guess.

Everyone needs to have at least some kind of general understanding of shadows and shadow nature--some kind of flimsy, scribbled, frustratingly undetailed map is better than no guide at all--so that we're not constantly stumbling.  We all need to be able to play around, without being shocked and terrified, when the sun sets.

It's simply a matter of self-preservation.  If you're into that sort of thing.
Posted by AddovoltProductions at 8:54 PM